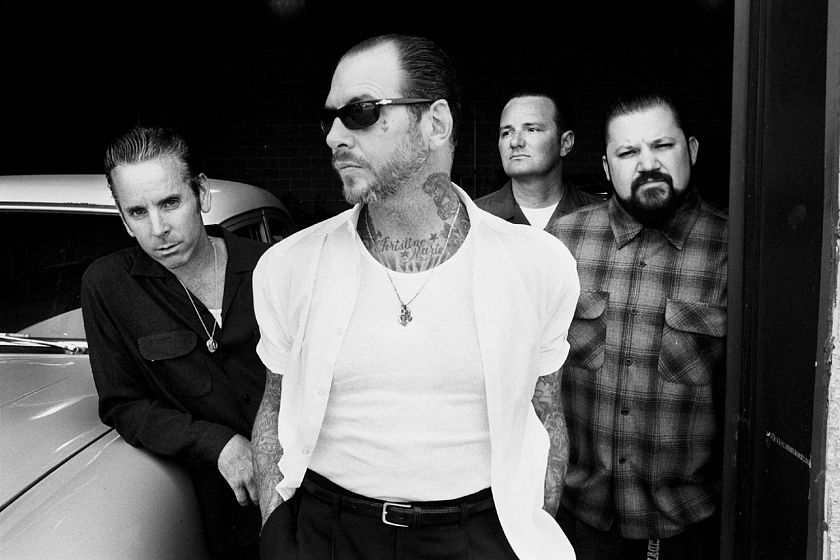 Here’s how you know you’ve made it in the music business: You’ve stayed strong for three decades on your own terms, on your own time, by your own rules, and over that time your influence has only grown. Each of your albums has been stronger than your last. You’ve been brought onstage by Bruce Springsteen, because he wanted to play one of your songs. You’ve seen high times and low ones, good days and tragic days, but every night you give 100%, and every morning you wake up still swinging.

This is the short version of the Social Distortion bio — the long version could be a 10-part mini-series. But over the past 30 years, the punk godfathers in the band have all but trademarked their sound, a brand of hard rockabilly/punk that’s cut with the melodic, road-tested lyrics of frontman Mike Ness. Their searing guitars and a locomotive rhythm section sound as alive today as they did in ’82, as do Ness’ hard-luck tales of love, loss and lessons learned. “The most common thing I hear is, ‘Man, your music got me through some hard times,'” Ness says. “And I just say, ‘Me too.'”

Hard Times And Nursery Rhymes (produced, for the first time, by Ness himself) is the band’s first record since 2004, but the break hasn’t changed them much. It maintains Social Distortion’s key components — an all-but-perfected mix of punk, bluesy rock n’ roll and outlaw country — but it also finds them stretching the boundaries of their signature sound. “I didn’t want any one style of writing,” Ness says. “I didn’t want it to be all heavy, like “White Light, White Heat, White Trash.” I wanted some heavy and some light. I wanted some fiction and some nonfiction. I wanted versatility.”

That’s evident right away. The record’s first vocal track, “California (Hustle and Flow),” finds Ness and the band not roaring out of the gate so much as swaggering behind a chunky Stones-style locomotive groove. “This record has a lot of my influences,” Ness says, “But how far you go with those influences is up to you. With this record I wanted to go a little farther. I wanted people to hear that second track and realize, ‘Wow, this is not just another Social Distortion record.'” (For good measure the track has hints of “Ball and Chain” and the Stones’ “All Down The Line” and, for the first time, female backing vocals. “I’ve been listening to records for years with (backing vocals), and I was like, “Hey, why don’t I do that?” Ness laughs.)

Not that the band’s punk foundations have eroded; the first single “Machine Gun Blues,” a piece of gangland fiction set in 1934, could hail from “Somewhere Between Heaven and Hell.” But the record is evidence of the band’s ability to evolve. “Bakersfield,” a setlist staple in recent years, is a waking-on-the-railroad-tracks story of wrecked love, forgiveness and Buck Owens; it closes with a spoken-word verse to make Merle Haggard smile. “Can’t Take It With You” sports a Jerry Lee-style piano solo that scorches paint. And set closer “Still Alive” is a soaring carpe diem with an added emotional weight that can’t be described or duplicated.

“The album is reminiscent to me of “Somewhere,” but it also has some of the darkness that “White Light” had. It has some of the flavor of “Mommy’s Little Monster,” Ness said. “I think it’s very signature. We’ve never been afraid to evolve and show people what we can do.”

Now in their fourth decade, Ness and Social Distortion have officially done one of the most non-punk things possible: They’ve failed to burn out.

Mixing Springsteen’s factory-overalls ethic with Southern California punk energy and black leather, Social Distortion formed with Ness and high school buddy, the late Dennis Danell, in the late 1970s; the group broke in 1983 with the thrashing plate of punk and displeasure “Mommy’s Little Monster.” Their 1988 follow-up, “Prison Bound,” hinted at a sonic change to come, and by the band’s self-titled 1990 record and 1992’s “Somewhere Between Heaven and Hell,” their sound had solidified into the instantly recognizable brand of rock n’ roll that’s defined them since.

These days the band is rarely off the road for long, and continues to grip fans who have been around since “Mommy’s Little Monster” while drawing new ones who discover the band through hand-shot YouTube clips. “I see people bringing their kids to shows,” Ness says. “And I see kids bringing their parents.”

Social Distortion is a mix of potent power, appeal across all age brackets and a genuine satisfaction at reaching as many people as they have. “I write songs for myself, and I hope that other people will like them too,” Ness says. “I think every record you make is showing people what you’ve learned over the past few years. It’s showing people, ‘This is what I know.'”