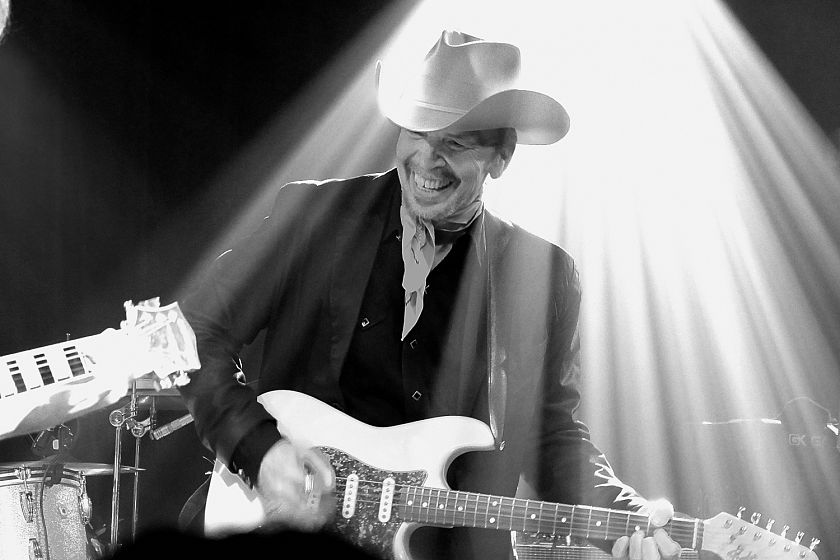 Dave Alvin with The Guilty Ones

Dave Alvin, a Grammy Award winning songwriter, singer and self described “barroom guitarist”, is considered by many to be one of the pivotal pioneers of Americana. A fourth generation Californian, Alvin grew up in the small town of Downey and got his musical education by listening to the late night border radio stations, watching his older cousins play guitar and banjo, collecting dusty, rare 78s and sneaking in underage to bars with his older brother, Phil, to see their legendary blues heroes perform live and to learn from them firsthand.

Since forming the highly influential Roots Rock/R+B band, The Blasters, with his brother in 1979, and through his long, critically acclaimed solo career after he left the group in 1986, Dave Alvin has mixed his varied musical and literary influences into his own unique, updated version of traditional American music. Combining blues, folk, rockabilly, Bakersfield country, surf and garage rock and roll with lyrical inspiration from writers like Raymond Chandler and John Steinbeck, Alvin says his songs are like California, “A big, messy, melting pot.”

Alvin has recorded with such diverse artists as Bobby Rush, Tom Waits, John Mellancamp, Little Milton, Jimmie Dale Gilmore and The Knitters, while his songs have been recorded by performers like Los Lobos, Dwight Yoakam, James McMurtry, Buckwheat Zydeco, Joe Ely and Marshall Crenshaw as well as having been featured in various movies/TV shows including The Sopranos, Justified, Girls, Crybaby, Dusk To Dawn, The Wire and True Blood.

Special projects include Alvin reunited with his brother Phil for two blues albums including the Grammy nominated Common Ground, an album with Texas Flatlander Jimmie Dale Gilmore, a reunion with The Flesh Eaters, and his most recent project, The Third Mind.  In the best of days, Dave can usually be found somewhere with his band, The Guilty Ones, on some interstate highway headed to his next gig.